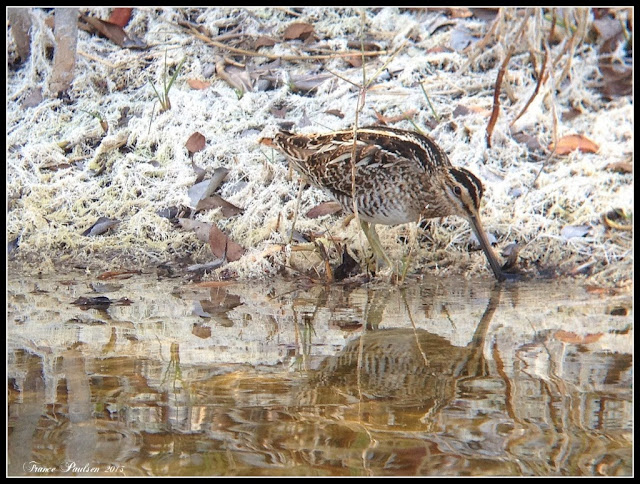 This afternoon I was shocked. I read daily the e-mails that comes through the Birdbrain list-server and one of those was from a gal who had been visiting the Babcock Webb - she shared with the group that she made a point of reading the hunting board on the way out and saw that 770 Snipes had been listed as having been shot and bagged.
Now, you tell me, why would anyone want to take such a small bird who measures 10" from tip of bill to end of tail - this makes no sense at all to me.
I could understand that perhaps it is hunting season and that it is permitted to bag a 'limit' of sorts - just wondering here....if they are plentiful and in great number, how come only one makes it down to the Bailey Tract? Such a low number would make you think that they are endangered - but perhaps they are plentiful in other areas.
I hope that the birds fed a few bellies and that the kill wasn't just a 'sport' of some sort.

BTW - this photo was taken at the Bailey Tract earlier this year. The Snipe has just recently returned after being absent for 6 months or so.
Posted by France Paulsen at 11:48 PM