There has been several reports about a nice assortment of ducks/birds being seen at the Estero Preserve on the north side, so Elaine and I got ready for the trek - armed with mosquito head net, water boots, long pants and long sleeve shirts. I opted to carry my scope and a backpack with my bird book and a couple bottle of water and I swear that my scope and book doubled in size on the way back.
The trek was quite a challenge, the terrain at first was quite uneven which soon became mud and then water - ok, so far so good. Then we ventured toward the north - following a map/satellite on my IPhone - but it was no easy feat since there were no visible paths as we walked in hip high sedge. The sun was about to rise with an orange glow in the horizon 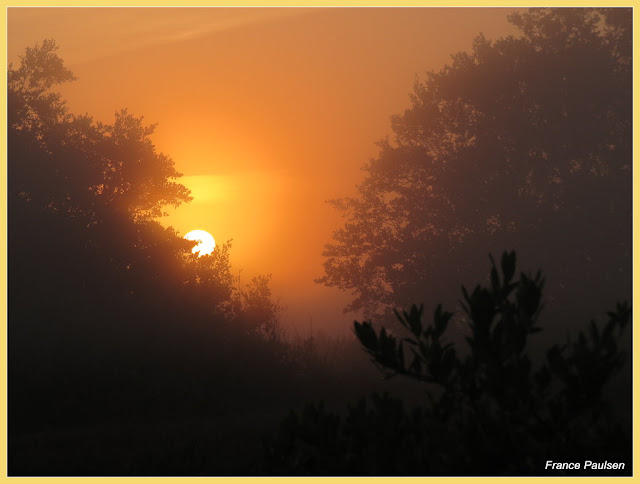 just breath-taking for a brief moment and then the fog rolled in as we watched at our 'pond' location, my scope fogged up and we could barely make out what was 100 yards away.


Then the sun burned the fog up and the American Avocet beautiful plumage came through. I didn't take many photos today but did admire through my scope - see my E-bird List for today. It was a great day combined with an aerobic exercise and I hate to admit that this was the first time that I actually felt my real age - getting older is not for sissies, that's for sure.
Posted by France Paulsen at 7:28 PM